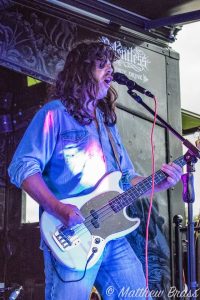 Nigel was born into music with his mother being a student of piano and music theory, his father a top-rated concert pianist and his step-father a folk guitar player. Bass was the initial starting point in early school bands, switching to rhythm guitar in early covers bands. The early 80s saw the formation of Renegade Angel, with Nige on vocals and rhythm guitar. He began co-writing a lot of the bands songs together with Jonny. Two of the songs appear on the album ‘Offering of Isca’.
After cleverly eluding fame with Renegade, they formed a covers band in which Nigel returned to the bass guitar to accommodate Mark on rhythm, and a keyboard player in what was now ‘Arnte Dot’. After 7-8 years of not playing, Nigel and Jonny formed another covers/theatrical band, again on bass, with some vocals and mucking about as front man – Munchen Beever lasted 12 years and from within that group Quo-No UK was born, gigging in earnest from March 2014. For the last two years Nigel has also been digitally recording and mixing his own music, mostly for the monthly ‘Basschat Forum’ competition, but he has also had a piece used in the production of ‘A Man of Letters’ at the Illminster Warehouse Theatre.