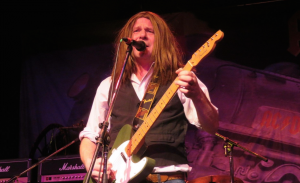 Born in South Yorkshire to a music teacher Mother and musical Father. Mark started playing guitar at the age of 13 when he formed a band at school. A succession of musical interludes followed including the school orchestra on trumpet, to playing and song writing for a heavy rock outfit called Prowler in the early 80s.
When Stardom looked to have turned its back on him, he ventured into the backstage area and had various jobs with bands around the London scene as a guitar and drum technician. He eventually became Tour Manager for Radar and other London bands and also worked for Phil Manzanera of Roxy Music
and David Gilmour fame.
From his early teens, Status Quo has remained, as with the whole band, his passion; and it was this that led to the formation of Quo-No UK.