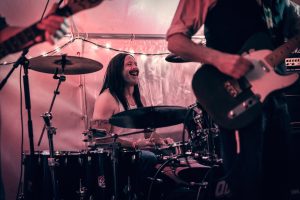 Jason’s first band was called Inferior, together with Jonny’s brother, Simon. This band played with Lemmy and Wurzel from Motorhead at the Piccadilly Theatre in London. The band then moved to Salisbury to pursue music full-time.
They were lucky enough to play some great venues such as the Marquee Club, Manchester Apollo and Nottingham Rock City. A support slot followed for Diamond Head’s comeback British tour. They also played on the same bill as the Wildhearts and the Canadian rock band, Helix. Unfortunately their bass player, Pete Vuckovic, left but went on to play with Diamond Head and then 3 Colours Red (but Jason was never envious, well perhaps slightly).
Jason had a break from music for a while before performing with local band Soul Traders before joining the world famous Beevers and then onto Quo-No UK.